Biography
Born in 1979 in the province of Bergamo. He graduated from the Art School of Bergamo ( experimental section ) and graduated with honors from the Academy of Fine Arts of Brera , Milan. Enrolled in the course of Stage Design of prof. Enrico Mulazzani , it will be the assistant during a. A. 2006/2007 . After his academic studies , he specialized at the Ecole Internationale Jacques Lecoq in Paris ( LEM course ) . Activity scenic soon joins the artistic one , preferring photography and installation, often contaminating different genres. In 2009 received the Special Mention of the Jury Prize at participating Patrick Barlettani NEXT_GENERATION , edited by Roberto Milani Gallery, St. Lawrence (Milan) . In 2010 his first solo photographic O / O at Baciccia Art & Food (Piacenza ) to be followed , in 2011 Incipit , staff at Biffi Arts Photography & Video (Piacenza ) by Elisa Bozzi and in 2012, Playing Don Quixote , staff at Numen Gallery Contemporary Arts (Benevento ) by Silvia Bottani . In the same year he participated in Affordable Art Fair , Milan, with the Gallery la Lepre (Piacenza ) 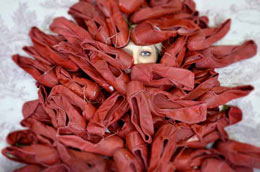 Dancing with myself, 3'00", 2013
Starting from the fairy tale by Hans Christian Andersen's The Red Shoes, which inspired the famous film of the same name in 1948, directed by the pair of cult directors Michael Powell and Emerich Pressburger, the artist freely purifying the original story from the religious and moral vision of the Danish writer and reworks focusing on dance, through a reflection on the theme of art as a super-human strength and fatal vocation.
Visualcontainer © 2008-2021
All contents are copyrighted to their respective owners.