Biography
was born in 1976 in Munich and now lives and works in Berlin and Vienna. She studied at the Academy of Fine Arts in Munich (Olaf Metzel ), the Hungarian Academy of Fine Arts in Budapest (János Sugár) and the Academy of Fine Arts in Vienna (diploma supervised by Heimo Zobernig). In 2007 she was awarded the art prize of the Tisa von der Schulenburg Foundation. Since her video performance Gender Gamble (2005), the artist has been involved mainly with the theme of the mask, probing the depths between the aspects of concealment and the infusion with performative content. Her vocabulary has developed continuously over the years and has led to the production of series, which display quite diverse medium-form relations and are close to the traditions of post-ideological, antiauthoritarian practices. As the result of her critical, post-avant-gardist positioning, paradoxes play a decisive role in determining the form of her works. 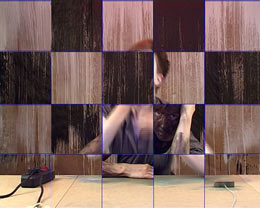 Person#21, 2' 27", 2011
Person #21 combines conceptually the media video and performance to video performance. In this work Karin Felbermayr repeatedly performs a choreography of different gestures and poses, which she took from perfume advertisements. It includes the use of several masking techniques: black and white stage make-up, black and white ink, rectangle, squares, technical mask (keying), coloured light etc.
Visualcontainer © 2008-2022
All contents are copyrighted to their respective owners.