Biography
Mauro Romito was born in Milan in 1980, grew up in Sicily, he moved to his studies in Rome where he studied theater and explores some of the techniques of the body and the performing arts. After a degree in communication and a master's degree in Interaction design leaves the theater to arrive to contemporary art with the medium of video. All 'interest in linguistic structures "incarnate" and the senses of the body language was added in the last period, the search for gender studies. 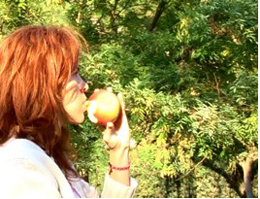 Man/Wo, 04' 08", 2006
A succession interplay between a man and a woman, as it may happen in a relationship or a within a power structure between sexes and genders. A multi-level play where language interconnects performance. The man asserts himself and restates the fixedness of the game. The woman persists in the play but follows a very fast evolution with several variants, till impatience brings her to the final unhinging. The man keeps calling himself by repeating the word MAN, which gives access only to a part of the dramatic scenery; in fact, despite repeating the non-sense sound WO, the woman resumes the whole of the game. Only from their succession can the word WOMAN finally exist: it may be made up of different physical and vocal elements such as a spit, a cough, a chant or total silence, but remains eventually engraved in the viewers’ memory just for the repetition. Rather than being due to the obsessing and univocal sense of the word “man”.
Visualcontainer © 2008-2021
All contents are copyrighted to their respective owners.