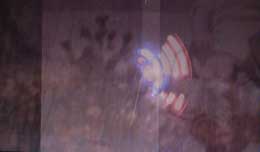 Foggy Mistake, 3'45", 2009
Memories are never totally clear and defined. Maybe the idea we have about them can be apparent, but memories always bring a wealth of images, sounds, feelings and emotions which never follow one unique direction: this brings to rather unexpected connections and to feelings and emotions that words cannot describe because of their complexity. When we store a memory in our minds, it gets covered with dust. And like a book on a shelf, it remains in the dust and is fed by the dust. When we recollect the memory, we soon realize that it doesn’t fit with our relevant idea anymore; it will have become another thing, or better, as being wrapped up with several other scraps, will be more things at a time.
Visualcontainer © 2008-2021
All contents are copyrighted to their respective owners.