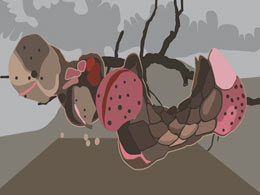 Gotic - 5'24", 2012
In the novel "Sputnik Sweetheart" of Murakami there is a moment at which the protagonist is on a ferris wheel and discovers that she can see her flat from above: she looks into her house and sees herself having sex with a stranger. Obviously it's a crazy experience, because she is in the ferris wheel and not in the apartment and she even does not know the man who is with her other self, what follows is a sense of dread, fear of not having control over things, in this case not even over herself. The spinning wheel in the video is a tribute to this episode of the book. The mere existence can provoke fear, it is bound to nature, which is foreign to us as is our own existence. Fear can be in the inability to grasp being in the world, the incomprehensibility of being alive. Familiar places -houses, trees, clouds, sunsets- potentially contain something disturbing. The houses, the walls, the windows are broken, they "open up" to show organic forms, halfway between plants and anatomical parts, suggesting that there are no real boundaries between us and the rest. It is not possible to protect ourselves from nature, or to hide from it. Furthermore there is no unrest outside of our gaze, as fear does not exist if there is no one to experience it. 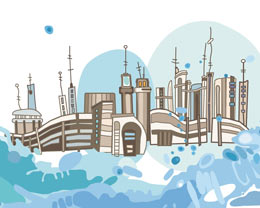 Miele - 4:02, 2010 musica di Jermozero
A city without foundations appears among the clouds. A voice sings its search of someone or better something that teaches her to “speak”, to interact with the surrounding, not to run away and get lost in itself. A brief journey through clouds and jellyfishes that explode to the pulsation of a shaken heart. Formato 16:9, music: Jermozero 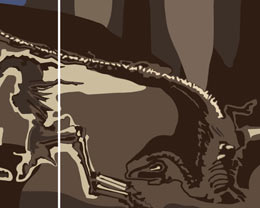 Waiting for the next meteorite to come 1:18, 2010
Until now we considered five major mass extinctions, spaced from one another respectively around 69, 124, 71 and 115 million years." Cretaceous-Tertiary extinction event, Triassic-Jurassic, Permian-Triassic, Late Devonian extinction , Ordovician-Silurian. Now we wait for the next meteorite. Formato 16:9, music: Jermozero

The Big Bean that landed on Earth 04' 00", 2008
The Big Bean has landed on earth. It has grown up and slowly risen through the clouds. So slowly that it was impossible to grasp its moving. So inconceivably huge that nobody could seize its shape. The Big Bean is laying deserted. Too big, too slow, approximating invisibleness. It’s dumb as it doesn’t bring any story: rather, it has nobody to tell us about it on its behalf. I do imagine the big bean and its story. Courtesy of Davide Gallo Gallery (Berlin). For any information relevant to a cultural and commercial destination of this video, please contact : info@visualcontainer.org Formato 16:9, musica di Jermozero

Now wait for last year 04' 06", 2007
The car crashes into nothing. It simply gives in, it surrenders. And the flesh changes appearance, boosting a new vegetable life. To become a plant, leaving off the animal skin. To go backwards into evolution to a micro organism (if this would really mean to regress). Neither a vegetable nor an animal state, not the least a fungus. To break up into the organic fluids, with hair tangled up on the steering wheel. The skin stretching out with such new fermenting lives, multitudes of rebelling germs, which build up towers in the putrefaction. And the days passing-by. Fog, rain, fireflies and flocks of migrators. To eventually access a new spring, totally fresh beyond our imagination. Not as a single individual anymore, but as an unconscious multitude. Courtesy of Davide Gallo Gallery (Berlin). For any information relevant to a cultural and commercial destination of this video, please contact : info@visualcontainer.org Formato 4:3, music: Jermozero 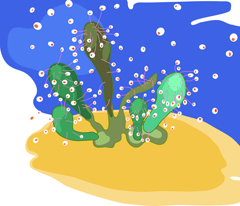 A Short Trip on the Other Side of the Galaxy 06' 00", 2006
The title itself tells about what's happening in the video. A visual diary of a short trip to an imaginary universe at the other side of our galaxy. There we find huge floating pods which are either colonized by alien bodies or are growing buildings within glass bubbles, as well as moving plants in their florescence. According to the science fiction tradition, the pods are macroscopic and infesting vegetables. Now and then their seeds fall on Earth if only somebody could become aware of it. In fact what is not directly seen is like having never existed. We can exist only through a sight that we don’t share. Courtesy of Davide Gallo Gallery (Berlin). For any information relevant to a cultural and commercial destination of this video, please contact : info@visualcontainer.org Formato 4:3, Music; Jermozero.
Visualcontainer © 2008-2021
All contents are copyrighted to their respective owners.