Biography
Pickerill is a multimedia artist with roots in poetry and photography since a teenager. He has been greatly influenced by Antonin Artaud, the Viennese Actionists, and 70's SoCal video and performance.
Since 1997 he has been developing the Omen Project a series of performances, photography, video and installations centered on his prose. Most notably he has staged 12 productions, and taken part in many Video festivals across Europe, including participation in the Liverpool Biennial. To better understand the Omen Project one should know The Iliad and The Odyssey and watch episode #38 of the original Star Trek series, Metamorphosis, keeping in mind this line from the Omen Project. 'Somewhere between the heart and the mind something went wrong.' 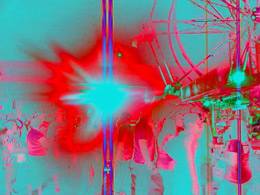 Deep Black Incantation #18: cesura, 6'13", 2011
A non-diegetic film of Lettrist influence. There has been a split (cesura) somewhere between the heart and the mind something went wrong. The mind seeks the body, the man seeks the woman, man seeks a return home to the heart.
Visualcontainer © 2008-2021
All contents are copyrighted to their respective owners.