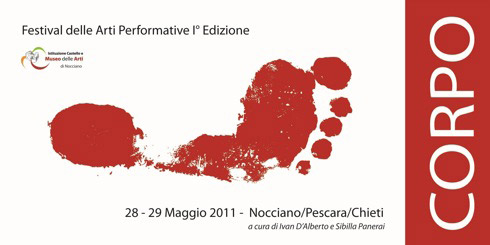 The urgency for a vision over ourselves and the others has paved the way for one of the earliest investigations in videoart history: the body, as the starting point for addressing such issues as the personal identity and the individual-society relationship in both common and hidden aspects.
Since the 60’s, when the narcissisticly powerful eye of the camera became the favoured medium by body art to provide the “art = life” equation, videoartists have never stopped offering an alternative insight to what identifies and distinguishes us in the relations with our very selves and the world, often resorting to languages that have challenged our ordinary and prevailing codes. This field of investigation is being favoured even today, also thanks to the ever-increasing diffusion of the videocamera among female artists, who focuses on the body because of its double facet as both an external involucre and the case of an intimately female universe, under the wish to seek an indentity within a largely male chauvinist society.
This lens on the individual can thus zoom over a much greater number of people and unite the micro and macro cosms of humanity into an ever lasting array: by benefitting from the latest digital tech offerings, videoart has become an extraordinary medium to shoot our performing bodies and eventually provide the most precise and unmatched representation of all the physical and social constraints of our age, with all that this means with reference to perceiving, communicating and expressing in life and art.
Those images can raise emotions and ask powerful questions: videoart is thus called to contain a proposal capable of providing the mere recording of reality with a maieutic and effective value, as well as offering delightful and fantastic visions of the signs and aesthetics of the body.
Contemporary videoart often plays on the border between such two opposite options: on one side, it can shoot life as it is and therefore represent nothing but the phenomenal reality being enriched by just art poetry; on the other side, video operators can choose to bring a new anthropological set to the stage, resorting to appealing and brainstorming contaminations with the most different and updated languages in multimedia and audiovisual experimentation.
Whatever the choice of the videoartist, the final result is the videos’ amazing ability of literally throwing bodies to the contemporary scenery, in which we would even find our very ones if we just dare watch.
Giorgio Fedeli

The Contemporary Art Museum in Nocciano starts the Spring and Summer season with a Festival about the most controversial offering of art history: Performance , within a cultural occasion to go back to the world of Body Art, Happenings and Actionism.
The event, under the name of CORPO: Festival delle Arti Performative (I edizione), will comprise two sections: debates about historical artists, video-performances of whom are being shown, and real performances by young artists at MAAAC in Nocciano, Florian Teatro Stabile d’Innovazione in Pescara and Teatro Marrucino in Chieti.
The Festival is curated by Ivan D’Alberto, the director of MAAAC in Nocciano and by the art historian Sibilla Panerai.
Performance-related video artworks from VisualContainer’s archive will be presented at the meetings in Nocciano and Chieti.

The event is under the sponsorship of Chieti and Pescara Provinces, Fondo Ambiente Italiano, Museo Hermann Nitsch in Napoli, VisualContainer, Florian Teatro Stabile d’Innovazione in Pescara and Delloro Contemporary Art Gallery in Roma, and benefits from the economical support of Nocciano municipality, Abruzzo Region and of Pescarabruzzo Foundation.