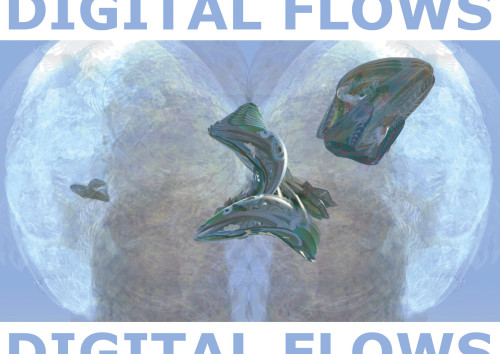 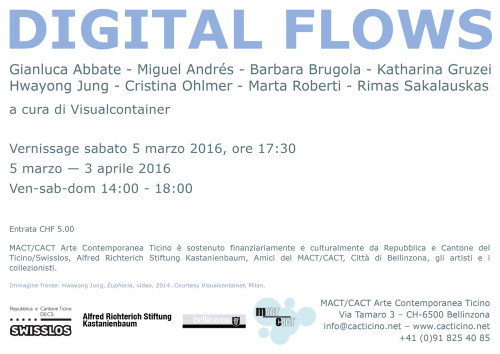 DIGITAL FLOWS is the exhibition that opens the 2016 season. Curated by Visualcontainer Milano, the exhibition also pays tribute to the tireless labour of love conducted by this video archive, which – by virtue of the quality of its commitment and in parallel with the off space [.Box] – penetrates into the sometimes sterile recesses of the more accredited museum institutions. Established in 2008 in the heart of Milan, Visualcontainer has become something of a showcase, primarily for archiving and presenting the idiom of the artist video, a language that is still very liquid and in the throes of vigorous evolution. Its directors’ international approach and global vision have raised its status to that of a privileged location, something along the lines of a German-style Archiv und Kunsthalle of the language of video, set down in the very heart of Italy’s business capital and crystallised more by virtue of its contents than because of any kind of institutional approach.

The video medium has undergone many of what might be termed transitory changes since the seventies, progressing from the yoke of the performing arts to a cross-fertilisation with the then-powerful cathode ray tube TV, when the force of advertising ploughed many a powerful furrow across the market of imagery, a parasite that sucked so much of the lifeblood from video art and artistic language as to surpass them in many cases and induce authors to correct and readjust their – often cannibalistic – aim at the means of production itself.
Video, like photography, is the most immediate documentary mirror of the reality around us that shatters us into the trans-identity of globalism.
Since the days when video was essentially experimentation and an antithesis response to the visual experience traceable to painting (we are in the late sixties), in today’s world, where “we’ve already tried everything”, novelty comes paradoxically from the resurgence of digital, which imbues our entire existence with a fixation with socio-global communication that nobody ever necessarily asked for, but that nevertheless induces a new aesthetic model.

DIGITAL FLOWS sets out to outline and highlight this latest phase of video production. This is how the curators, Alessandra Arnò and Paolo Simoni, describe the exhibition and the curatorial choices they have made.

[…] “The image, in its digital transcendence, is now immaterial: it is a bit, a beam of light: it lives among the clouds and passes rapidly through the web of data. So what does that leave us of its ‘inconsistency’ and what is that attracts us towards the video image’s non-materiality: could it be its evocative or illusory potential?”

DIGITAL FLOWS is a visual flow that induces the observer to experiment with different levels of awareness of sight, moving along a progressive installation that starts from the peak of visual fascination with numerical data, passes through our sense of disorientation between everyday reality and digital panoramas and ends up illustrating the observer’s own condition by simulating a self-representation.

The first piece on show is Miguel Andrés’ SYSTEM, which represents a sort of mirror where observers can draw comparisons between themselves and a hypothetical machine-man of the future, where the experience of the senses is replaced by a precompiled technological equivalent.

Synthetic beauty is represented by the self-generating forms of perfect landscapes in the work EUPHORIA by Hwayong Jung. The elegance of the fractal formulae that simulate the concept of self-similarity found in the real world becomes something of a trap for the eye, leading to the peak of visual fascination and full immersion in these digital scenarios.
As a result, the exhibition room becomes a place that seems to be tasked with the ‘apparition’ and the ‘manifestation’ of the numerical algorithm that manipulates real data by providing a constant random simulation of perfect non-material forms.

The observer’s eye is deceived once again by the reassuring representation of everyday ordinariness in the work of Rimas Sakalauskas. SYNCHRONIZATION reveals structures that unexpectedly shy away from their usual urban location. As the real scenario changes shape, bit by bit, the cityscape’s reassuring stability comes to life, changes connotation and is transformed into a launchpad pointing towards the unknown. The real object returns to the ‘virtual’ world of ideas with an inverse motion.

A perfect representation of the contemporary world is proposed as a continuous flux of situations and scenarios in Gianluca Abbate’s work PANORAMA. Digital reworking restores all the contemporary melting pot’s intrinsic chaos, laying down layer upon layer and limitless landscapes in a single irrepressible flow of images of the global world.

While the audiovisual works experienced up to this point all play with the concept of disorientation, the next one, LAPSE OF VIEW, for which Barbara Brugola drew her inspiration from Caspar David Friedrich’s celebrated Wanderer Above a Sea of Fog, provides a moment of reflection about visuals, a return to ‘true’ vision, exactly like the character who stands waiting in quiet observation of the horizon, his gaze surveying the whiteness. The moment is a very private one, when the observer comes face to face with reality and the suspension of his gaze.
It brings us back with a jolt to reality, to vision and to the history of the visual arts.

Inspired by the works of the Lumière brothers, WORKERS LEAVING THE FACTORY (AGAIN) by Katharina Gruzei is something like a contemporary take on the painting of the Fourth Estate, where individuality becomes a collective body. The workers in the title could be men, automatons or slaves: in any case, they are participants in global industry. Like the workers illustrated by the Lumière brothers, they are actors in the industry of imagery.
This makes the work into a further mirror for ‘reflecting’, both sociologically and digitally, on contemporary conditions.

The exhibition experience also extends to screens and devices, which unexpectedly convert from objects we use every day to become places where works of art appear, re-attuning the eye to exercising its sight, as in Cristina Ohlmer’s piece PIXEL MOTION. The little coloured squares in an exercise book transform into the unit of digital measurement, the pixel. In ten exercises of style, the pristine cloak of the black forest becomes the pretext for recontextualising the role played by pixels and digital representation in natural analogical space.

Marta Roberti’s work SCARABOCCHIO similarly revives a classical animation on the screen of an everyday device, which for the occasion becomes a pocket digital memento for this human-insect hybrid, in an attempt to restore its own equilibrium.

The exhibition comes full circle and then reopens with mirror works, where visitors can ‘reflect’ on their existential condition before letting themselves go with visual pleasures. So DIGITAL FLOWS plays on visual fascination, on the suspension of disbelief and on digitally reworking real data, opening up multiple levels of interpretation both of how we use and relate to technology and of its evocative, illusory power.

The CACT centre of contemporary Art in Canton Ticino was founded in 1994, whose target is to organize international contemporary art exhibitions and launch thematic publications. Since 1996 membership cards for friends and donators offer combined subscriptions to international art magazines and intercantonal cultural Institutions, it’s target is to inform our public about other cultural realities spread all over the national territory. In 2009, the MACT Museo d’Arte Contemporanea Ticino was born, in order to work on new ways of presenting artworks out of private art collections.

MACT/CACT Suisse enjoys the financial and cultural support of Republic and Canton of Ticino/Swisslos, City of Bellinzona, Alfred Richterich Stiftung Kastanienbaum, Friends of MACT/CACT, the Artists.