LIUBA is a performance artist and video artist. She works with performance art, urban interactive public art works, video, video installation and mixed media works.
1972 Born in Milan. Lives and works in Milan and New York. Speaks Italian, English and Portuguese.
My art work resides in the intersection between art, human geography and technology. It’s related to social, anthropological, geographical, philosophical issues, human behaviour, interactivity and chance. I use different skills and media as performance, video, photography, writings, web, research, cooperation.
My interest is primarily in open-structure performances made into everyday life and in the interaction among myself, people, space and chance. I am working now on group performances, inviting people to participate actively in the work. I am interested in the way my performances mirror the identity of a society.
My work deals with often social, political and religious subject matter but I like to maintain a somewhat distance and to look for a subtle and ironical approach.
I am interested in art going into life. My main interest is life.
Artists' Catalogue Order Now 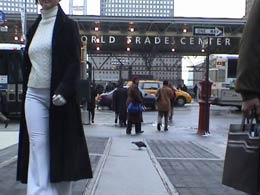 The Slowly Project
Take your Time, New York - 19:36, 2011
Perfectly performing in ‘slow motion’, controlling each muscle movements for hours and hours is very difficult. ‘Taking our time’ in life and society is as difficult as the performance but, nevertheless, necessary. 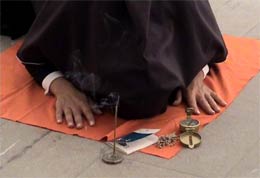 Liuba - The Finger and the Moon #2,
12:38, 2009-2010
The Finger and the Moon project #2 has been performed in Saint Peter’s Square, in the heart of Vatican State.A nun in the Vatican is a normal figure, mixed with all nuns of the myriad of congregations walking in Saint Peter. But seeing a nun who prays in other religions caused a short-circuit and many different reactions: surprise, devotion, shock, agreement, interest… and at the end Police stopped the artist, arguing that she was not praying in a ‘normal’ way…What is very new in this project is the simultaneous show of the performance in different cities in the world. Using the new possibility of technologies the new interactive public art performance have been seen live in a different part of the world, that in this way were symbolically connected as part of a network. A new website has been designed for the project too. 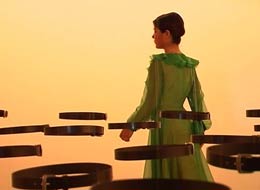 The Slowly Project - Art is long,
Time is short, 14:45, 2009
The project is a work above society and our lives but also a work about time: to take our time, in life and in art, beyond formal, stereotyped, and social ways.
Slowness becomes a metaphor of contrast between personal time and social time, between interiority and exteriority 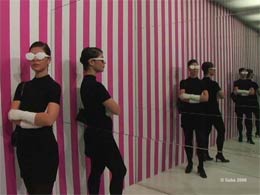 I love to see the Armory, 13:18, 2006
The concept of the work is a ‘light’ critic of hypocrisies that made people live without ‘seeing’ even if they think they are seeing. Art exhibitions are visited but often they are not ‘seen’. Most of the people go there not for seeing but to be seen. The video is an ironical and paradoxical way of showing invisible concepts and behaviours in a visible way.
The performance is acted in a real-life situation, to create a bridge between reality and fiction, world and art. In this way, people and reactions also become an essential part of the project itself and they are part essential of the work.
The reactions made at the Venice Biennial Opening in 2003 are completely different from the ones in New York. The performance and the resulting video is therefore as well a subtle sociological analysis of countries and people. 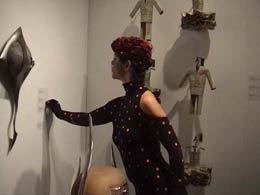 Liuba - Virus New York, 15:35, 2005
The same performance was also made at Arte Fiera Bologna, with totally different outcomes. Even in New York the performance was interrupted and Liuba ejected, in a paradoxical dialogue (the shooting were prohibited and the cameraman had them hidden) on the omnipotence of God and the god-sale-money 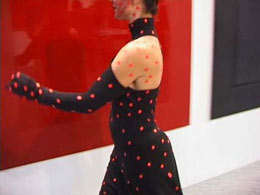 Virus, 12:52, 2004
Virus is investigating over the ‘buying bulimia’, that affects the daily-life models and the art world as well.
Liuba went to Bologna Artefiera’s opening dressed with red points. Then she took off them from her dress and put over all the art works exhibited at the fair..
Visualcontainer © 2008-2022
All contents are copyrighted to their respective owners.