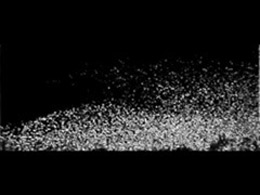 Migrations, 5’13”, 2011
Migrations tells the delicate moment of the departure of the birds to places on Earth at their most favorable. Performing, in the sky, spectacular developments dictated by many biological factors, the birds, as well as men go in search of the ideal conditions for « generate and regenerate. » Despite the presence of man conflict that often destabilizes their orientation, the birds have the atavistic ability to prefigure, in my mind, the real geographical maps of the area. The groups examined and moving, are composed of thousands of birds that turn and stand out like small gray dots on the white background of the sky. Once again, the rarefied images and have a few points of reference, create perceptual ambiguity that transforms these creatures in other microscopic organisms and on the move. 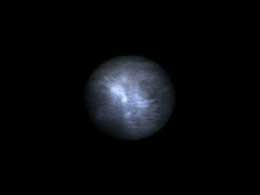 Anamorphosis, 11' 00", 2008
Through an empathic, slowly cadenced journey, there we assist to an emergence from the depths to the surface of matter, from its elementary to its complexity. The perceptive ambiguity of the nature of sound and images suggests plausible scenarios, surreal or completely abstract, to the mind, forming a "journey" from the micro to the macro world that tells the time of creation, from the basic elements of atomic structure and cellular organisms, which often don’t lead back to recognizable entities. In this case, the mode of video editing is called "videoation" as the sequence of images was created after the sound.
Visualcontainer © 2008-2021
All contents are copyrighted to their respective owners.