Biography
Born in Brescia (1968)
Lives and wirks in Verolanuova (BS)

Fatti raccontare come è andata - 10:37, 2015
In a nutshell they carried away everything that was dear ... that's how Sara opposed, persistently, day after day, because they defend their game meant to protect his territory. And in the end how it went as history-the sign says. Video once again through the universal game metaphor - linked to childhood memories of generations of children at all times and in all places - the determination to act to uphold their own piece of "world", the experience space the protagonist being built through his drawings, drawing, adjusting, learning by trial and error. And 'to preserve the right to keep playing that the child defends the space that builds around himself redesigning every day with more and stronger design. As the protagonist of the video I say that we can try (2008) was forced to find from time to time new exceeded walls strategies, Sara does not resign but appropriates that space, look after them and denying, in turn, deletion if someone from the outside destroys his game, every day the little girl playing on the concrete through the action of the drawing. This involves a fluctuation of signs that are stratified by adding design and its negation, on a track that has become ever more apparent, shelling and then redefines, is nuanced and then reborn from the "ruins" up to form the structure of an image memory that tells the story how it went. 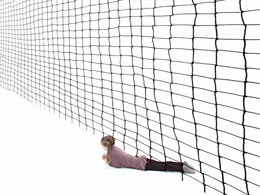 Io dico che ci posso provare, 11'45", 2009
A little girl hops across a boundless space. At first nothing seems to hinder her game. She can do whatever she likes and succeeds in fulfilling her dream of getting in contact with the world that surrounds her. However, this playful atmosphere changes gradually: obstacles grow between the little girl and the space around her; they hinder her movements and force her to find shortcuts. In the attempt of overcoming these obstacles, that metaphorically, represent physical and mental barriers, the little girl has to invent new strategies. If a wall is too high, she looks for ladders, stools and chairs. If an iron plate gets unexpectedly in her way, she clenches fists in the hard attempt to move it. Tricks, jokes of fate, mishaps that upset the balance of our minds. They represent the adversities we have to deal with in our lives....adversities that grow with us; they increase far and wide just when we have the illusion that we have become bigger and stronger. However, this child doesn't give up and insists in finding an alternative, looking for a possible shortcut: she resists with creativity. Her condition is made more uncertain by the lack of space coordinates, which prevents her from foreseeing the direction of events. Before new events she has to stop, to devise a plan, to find solutions in order to protect herself and go on playing. 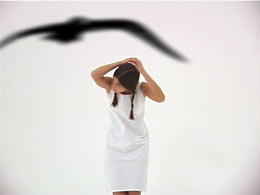 Noli me tangere, 6'40", 2007
In Noli me tangere Armida Gandini delivers a video version of the stratification that characterizes her blends of drawings and photography, on this occasion working with film and animation sequences. The setting is a kind of ascetic limbo, in an atmosphere loaded with premonitions which seem to prefigure sudden, unpredictable changes. Possibly the dangers that lurk in our everyday lives, or in the natural world (with the doom-laden warnings currently being propagated by the world of science), these are represented visually in the shape of birds and insects which invade the space around the solitary female character (a tribute to the Hitchcock classic).
Black forms invading a white background, volume in a void, penetrating and saturating it: a representation of the experiences we undergo and that shape our identities, our real or imaginary fears, the encounters and adversities that change our lives, leaving us to pick up the pieces and carry on, with a new defensive armor-plating inevitably in place. Is our desire not to be affected by events futile and childish? The words of Oscar Wilde's De Profundis come to mind: "To regret one's own experiences is to arrest one's own development. To deny one's own experiences is to put a lie into the lips of one's own life".