Biography
Claudia Maina is a Milano-based artist.
She has studied Sculpture and Interactive and Performative Arts at Brera Academy of Fine Arts, with a final research paper on interconnections between sculpture and music.
My work enquire in the relation between the body and the environment.
The body is put in relation to the dimensions of space, time and sound in which it lives. Starting with concepts like repetition and habit, the research shifts on how they act within daily life, influencing the psyche and the way to inhabit the spacial environment. The daily physical relation is constantly confronted with the emotional one, tied to the perception of our body. This generates a definition of the space constructed with a formal relation constantly shifting between equilibrium and obsession. I’m interested in analysing how time is perceived and study the body as a place of temporal memory, acting as a link between past and future.
The project of my work goes hand in hand with a theoretical reflection on sound as the fundamental element for the perception of the external world. I use drawing, sculpture, installation and video. 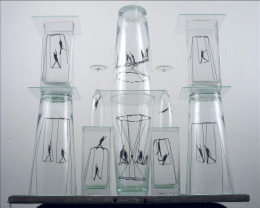 Bedbugs Castles, 02'48", 2010
Bedbugs Castles are imaginary short-lived buildings, like houses of cards, where little bug-men have been placed. They are a metaphor of the impossibility for human relationships to be born, or a metaphor of a communicative aphasia inside its cold timeless suspension.Abstract architectures ready to fall down and then to rise again, like a never-ending game, show a choking lack of connection among the individuals.A chant ironically reminds you of that arduous meeting. 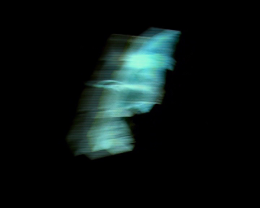 FALLING-CLOTHING, 04'13", 2007
FALLING-CLOTHING shows a flow of clothes that fall into an abysmal emptiness. Clothes that, having been deprived of their function of covering up or shelter the body, render the idea of an abstract body.The falling takes place in a suspense and slow motion dimension. The repetition of an action-the falling of the clothes-enhances the idea of the ephimeral. In the video the concept of a continuous instant is given by the repetion of images and the modulation of sounds. A perpetual fall of non-bodies which is continuosly repeated in an eternal present. The clothes emerge from a light that seems surreal, and their bright colours, reassuring and pleasant, relieve the suffering of this fall. 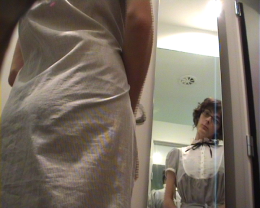 CHANGING ROOM, 06'22", 2006
CHANGING ROOM speaks about a journey in C.so Buenos Aires’s dressing-rooms, in Milan. A cyclic-osbessing trasformation of my body that assumes sham identity. 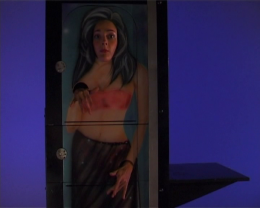 Miss Maina Magic, 04'42", 2006
Miss Maina Magic shows the illusion of unsticking a body from its head. It is all about a magic box displaying my body divided into five parts. Like in trick, I am both magician and assistant. A never-ending breaking down takes us towards the making of a new hanged being. A fake unity, a fragile balance ready to be melt into a new partition.