Biography
Aka Fabio Toffolo and Michael Andreoni
GLOBALGROOVE is a intermedia laboratory that explores the evolution of the concept of collage and contamination between genres. A pre-existing sources are side by side or alternating original materials in a cut-up practices crafts and digital postproduction.
All projects revolve around some fixed themes (society, economy, politics, art, medialization of world), developed pattern with different conceptual and emotional tones, often hovering between critical disenchantment and dark humor. 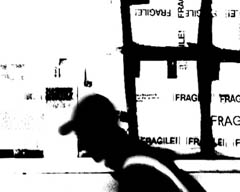 Paik or Paik, 4'00", 2009
Paik or Paik is a video project halfway up audio clip and performance. By chasing the syncopated rhythm of the audio track, in which the Nam June Paik name is being hauntingly repeated (with an undirect hint to our brand), the authors take off and re-position boxes and packs, thus questioning their condition as artists and the meaning of their works 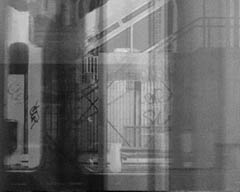 Tracking, 5'12", 2006
By reversing the mechanical process of the tracking shot, in this video the flowing of the image is not played by moving the camera or adjusting the focal properties, but rather staying within a fixed framing. In this latter, close-up and depth of field have been alternated, so as movement and immobility, dreams and ordinary banalities.