Biography
Patrizia Bonardi's artistic research starts from an intimate and inner core, in which a woman tries to undertake an active part as a citizen, with a direct political and social engagement. Mother of three children, she studied The Theory and Practice of Contemporary Artistic Language, analyzing the the relationship between artists and sociologists, graduating with top marks. She has undertaken an environmentalist engagement as well and has founded a Committee for Health and Territory. Her artistic projects have developed in various contexts, from drawing to videoart, from painting to installations, with a well distinct personal imprint. Bonardi's videos have been shot with a non-professional video-camera and they show simple actions, often undertaken by the artist itself. The videos show an inner evolution, her attempt to develop an intimate dimension into a social one. Care-taking becomes a comprehensive, political attitude and some materials can symbolically convey this strong engagement. The bandage dipped into beeswax builds frames that remind us of man and nature pain. This is the source for her works, developing into installations like "Liquid collapses", "Care" and "Quasar". She is the creator of the online page artists.sociologists and founder of the association with the same name, that tries to enable the dialog between artists and sociologists, in the light of her thesis “Incontri inattesi quando artisti e sociologi dialogano” 2009. Patrizia Bonardi lives and works in Bergamo, a town in North Italy. 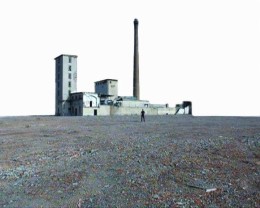 melograno.pomegranate, 5:09, 2016
Nuisance - jarring sounds - human and nonhuman. A ghost factory in the desert, a black man moves, is a conductor who directs a nothing? Shadows descend from non-places and become a single woman, the origin of the world, when you danced in dialogue with the stars, in the bond with nature desert and lush. And 'it is teeming life that steals a power that does not make sense and we would throw away into nothingness: the conductor's baton. The Director gesticulates, slows down, becomes depersonalized, you lose ...? The woman becomes a shaman, gives wind branches, and the fruit of rebirth: the Pomegranate. (text by Milena Gammaitoni and Luigi D’Elia)
Performer : Maurizio Salvetti and Federica de Matthias 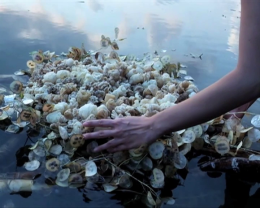 Fiori migranti.Rituale, 3:40, 2015
A voice arises, as if from a state of suspended time, eternal in essence. Contemporarily, a welcoming ritual is performed on the banks of the lake of Calamone. Twilight tints the waters and on its surface a buoyant presence emerges from the obscurity, floating between earth and sky and bringing with it a larger vision of a boat tight with migrants. From its banks, welcoming hands reach out to embrace and re-embrace: it is only a fragile raft that bears minute flowers woven into each other and made from bandages dipped in bees wax. Moon-shaped leaves called Lunarie, with their natural waxy tones, surround these flowers. They hint at the need for solidarity as a magical fruit which can only be born by. (tr. Pamela Baldacchino) 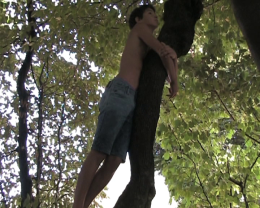 Patrizia Bonardi – Run with the past, 4: 41 2014
The place is natural and artificial, made of trees that are free from forced into ordered plots, becoming trapped. Three young people, in harmony with the environment, living in harmony until the shrubs to become comfortable border. The place is magical and hypnotic, full of suggestions, memories of the past, but does barrier. It's time to rejuvenate and find new freedom arborea, the way out of the woods symmetrical, perfectly concentric. 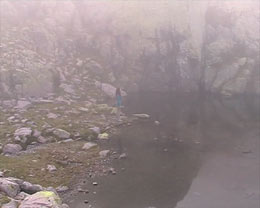 Water's expectation, 4'15'', 2013
Being young and old at the same time in the implicit wait of living and dying. A deeply dark lake, a voice split into maternal echos, and three children, my sons, that are waiting for trying their human fragility. Suspended in the fog which breathes hesitantly, which makes the lake darker, the well of experience, the end announced in its birth. The cold of the mountain, of a freezing water which paralyzes, while the voice reassures that it's life, that it's a test, that it's a moment and that the end is in the start. 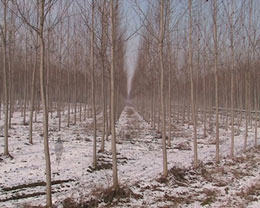 The immobility of tree, 3'11'', 2012
Our own substance vanishes in the madness of everyday living. We wander about anxiously in search of identity. The immobility of trees brings us back to ourselves. We dig to put down roots, to find a resting place made of memories, of white confetti, fragments of insubstantiality. In the video the immobility of the trees is contrasted with the evanescence of the figure that is multiplied into so many chaotic and identically insubstantial selves. The perfect geometry of the poplar grove is like a cage enclosing the winding path of human existence. The rational order that humankind has imposed by planting the trees this way denatures the variety of the trees, yet the perspective beauty, with the intensity of light concentrated in the central vanishing point, is still attractive. As it draws nearer, the eye of the video camera enables the viewer to notice differences, rediscovering the majesty, the uniqueness, of the tree. The figures walking around among the poplars seem to melt away like the snow they are feverishly tramping. Imperceptibly, however, they have within themselves the ability to focus on and reproduce images of what they are looking at. Finally they find the tree and the dispersion into a thousand selves is recomposed by the click. Silence comes onto the scene, in substitution to a mechanical voice that can barely remember its ingenuous poem. The figure has now become a person who imitates the life cycle of the tree out of attraction to it. She plants herself despite the frozen winter ground, surrounded by the fruits of the click that become the seeds of this attempt at regeneration. The fragility and the utopia of the gesture leave the viewer disarmed. 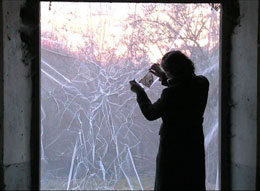 Lasting, 4'29'', 2008
Slow and repetitive movements; we are fully aware to be on a dangerous threshold, nevertheless we are hypnotized by the patience of the needle, by the wound caused by the laceration. The light seems to welcome us outside but any attempt to go out is frustrated by our true essence, being a sewing thread itself. We still don't know if this will last forever or only for a short time, until the moment when the collapse will take us further on, or the courage will take our hands, going beyond the screen, going beyond our imagination in order to look for contact, movement, participation.