Biography
Barcellona Pozzo di Gotto (ME), 1977
My work studies the basic mechanisms that rule feelings, focusing mainly on the dynamics generated by emotional connections and sexuality. I make emotional worlds that evolve through a broken and uninhibited narrative structure in which I mix references from classic iconography, random elements, everyday banality, my experience as well as my dreams. Video animation, drawing, and sculpture coexist in my installations and articulate an expressive universe rooted in the complex emotional and symbolic content I bring to it. My research touches on the expressive dimension of the spaces and in particular on the places I got the chance to visit. I aim to collect all the symbolic meanings from the location’s physical configuration by placing little plasticine dolls as the characters of my video animations. The attempt to explore and adhere to the location sometimes evolves into a site specific activity in which I leave the dolls after a last farewell photo. By doing so I commit them to the unique destiny that awaits them in that place.

Animal, 3:20, 2016
The video of digital animation Animal, just en act the primitive and instinctive dimension of the human beings. This ancestral power is lost and is opposed and removed for a domesticated dimension by the rationality.

Skin Life, 2:28, 2014
Sound: Antonio Dilillo
Skin Life is an animated video with digital drawings. This short animation is built around the symbolic meaning of the skin overlying the body and its connections, which can establish when it comes into contact with the outside world. The visual narrative that it depicts is fragmented, dreamlike but aims mainly to suspend the movement of the tragic actions of the main characters as in a still life.

I d. 4:50, 2015
The exploration of the desert as symbolic place is the point of departure that begins the complicated plot in which my characters of plasticine are animated and absorbed in a background sound that becomes more and more turbid as time passes. The space is in relation to the succession, slow-motion and reverse frames, is closed and immobilized as in a soap bubble. Scenes suggests a disorientated state, interrupted immediately because they race toward a single and long road all to be crossed 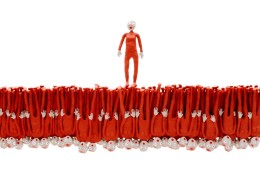 Stangliro, 2013 4’9’’
Video Stangliro comes from the observation of the film Metropolis by F. Lang. The images of Lang made ​​me reflect on the representations of the masses are characterized by an emphasis impetuous and mono-directional which is opposed to impotence of the person who does not adhere to this force. In Stangliro, the conflict between the "collective body" and the independence of the individual character remains unresolved because neither of the two positions prevails, accentuating the defeat in which both are predestined: the collective body does not generate any creative force and individual character arrives to get an emancipation which manifests itself through the conquest of his incomprehensible language. 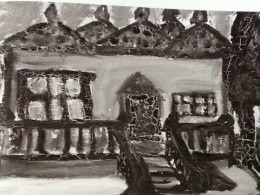 Smother, 2013, 5’30’’
The bond, which may be the most important and complex. The root of much existential anguish. A feeling nourished not by the lack of love, but the exact opposite: a love that suffocates because it is too big to hold. 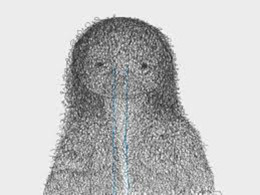 Minibaby, 2009, 1’15’’
One upon a time a girl who had decided to grow up. Soon, however, he realized that it was not easy as he thought. The happy dream of her childhood dolls and comforting emotions became, in fact, the trauma of adolescence between stretches of spiky hair and rebellious anarchist metamorphosis of forms. 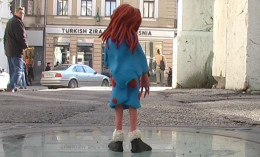