Matteo Milani is a sound designer and composer living in Milan, Italy. He started his career at the end of the 80’s in radio stations, cutting inches of music on analogue tape. In the mid 90’s he pioneered the rising of digital audio workstations. Now, he’s composing music in unusual forms, from mobile devices to virtual spaces. Maker of ideas, projects such as the Unseen Noises Library and the Lis10er App on the iPhone platform. Investigate and create music on mobile devices that transform in real-time the sonic environment.

Federico Placidi is a composer and sound designer living in Rome, Italy. Since the year 1993, he’s been working with several composers and performers as sound designer and live-electronics technician, thus developing his personal sound library and tools. He also worked as a sound editor / designer for numerous full-feature movies. His music ranges from “concrete” acoustic to experimental.

Selfish is a project of Giovanni Antignano focused on video live performances. His research ranges from video art to visuals and live performance. His live sets are centralized on an obsessive elaboration of the video loop, where the action is continuously replied and stratified until it reaches its fulfilment. From the end of the nineties until today he has been a member of minor and important collectives such as BlindVision, and the conceptual group Timet which he collaborated with for various sound installations

Girl Running, 9' 00", 2009
In the track Girl Running, a dialogue is established between the sounds synthesized with Xenakis' UPIC and the sound outputs of invisible electronic objects. By carrying these magnetic fields into the audible range, the sounds have been suspended, intimately researched, orchestrated, in order to cross the physical borders of aural perception. 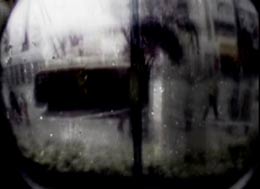 Invisible Words, 12' 46", 2009
Invisible Words takes its name from the fact that most audio sources in this track come from the typing of an old Olivetti typewriter. These recordings, after being processed using micro-montage techniques, have been presented in different metaphors.