Grow up in the rural hills of Apennines Mountains in Italy, Yuri Pirondi degree as “Master of Art” at the Art Institute “A. Venturi” of Modena in Photography and Visual Arts. Yuri is a filmmaker and visual artist who lives and works in London, UK. His work is broadcasted, screened and exhibited worldwide on both visual art platforms and film festivals. His work is a reflection on the relation between visual art and the cinematic experience. Right from the start Yuri has followed a multi-disciplinary and transversal artistic direction in which he collaborates with different artists including composers, writers, performers, experimental theatre and dance practitioners.

Ines von Bonhorst is originally from Portugal and is based in London, she have a BA(Hons) in Film &TV production at Westminester University and a HND in Multimedia at Kent Institute of Arte and Design, she is a Director, producer and video artist with over 10 years of activity. Her works range from documentaries, long and short films, experimental films and video art installations, produced UK, Portugal and globally. In her work she often explores notions of identity, form, human limit within a physical and mental realm and our relationship with society using the subconscious, surrealism and the counterfeit of being. She loves to mix the deceptive of the performance art, theater, circus, with life itself and thinks that the boundaries between the two realities are not so far from each other. Von Bonhorst uses space, architecture and mood as a way to tell a story or represent the sensations given by the location itself. 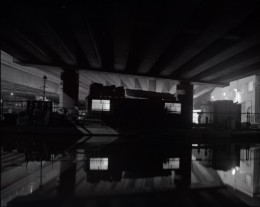 Void Shades - 10:00, 2012
Void Shades is staged in dark and empty spaces of the city, these areas are outlined by the shadows and the architecture of the buildings.
They represents empty canvases where is possible to see anything that provoke or stimulate us. This work is inspired by the Allegory of the Cave by Plato, where the prisoners couldn't move and the only thing that they could see was their own shadows.
Void Shades embraces the idea of "container", transforming the cavern in a city, and the shadows of the prisoners in the passersby ones.

Emergencia, 11:43, 2012
Emergencia is a performative video inspired by the allegory of Plato's Cave, narrating the light seen by the prisoner outside the cavern.
Prisoner's first reaction at the view of mountains, lakes and fields is pure astonishment, and fear of the unknown, it tooks him a while to assimilate his new freedom.
The piece is questioning if this first primordial freedom is insight to everyone of us, and how can be reflected in a urban context, relegated to the lines and the spaces of the city.

Standing Silence - 19:00 2012
As the world moves away from the Industrial Age and deeper into the Information Age, the relics of our former industries can been seen ageing and abandoned. Often, older industrial buildings and sites are so polluted with the materials, once used or made there, that the locations can’t be used for much else. Since they can’t be used, they simply sit and gather the layers of time that make them fascinating until they are demolished, repossessed, or completely forgotten about. These abandoned factories, have served their useful lives and now stand silent. I want to explore all the different aspects of these buildings, such as aesthetic form and architecture.
I want to explore the ways that human beings can use the factory roof as an aesthetic form and a way of expression, using colour, movement and objects to describe it.