Biography
Born in Salerno in 1983, lives and works in Rome.
She attended the Accademia di Belle Arti of Rome and earned a degree in history of art from Rome’s “La Sapienza” University. Featuring themes such as waiting, travel, nomadism and change, her works convey personal perspectives and an experience that is always becoming. Digging into her past, she documents gestures and movements, isolating fragments lie with the Before and After of a journey. Identity and nomadism delineate the duo of an emotional poetics, a lively logistics translated into a passage through objects, gestures and actions, that inevitably lead to a new beginning. Her works spread from performances to video, photography and sculpture. 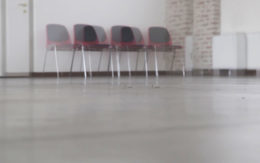 The video installation, created during the residence in Viafarini, tells the vertigo of a robot vacuum cleaner that seems to be looking for a house moving around the perimeter of the space.
A video made inside the Fabbrica del Vapore to re-move a place born as a Tram Factory in a domestic key.
“To circumscribe a place while passing through it, to stay on the perimeter of the houses of others, to wander in space hitting the baseboards in the desire of somewhere else. The robot moves in the balance, between order and chaos, between the private dimension and the public space: once inside it is vertigo. In an uncertain and unpredictable path, little outlined, the vision moves forcing to observe those parts where dirt settles more invisibly and through clumsy movements recognizes obstacles but does not always get around them. Sometimes it collides with limits, changes sound, triggers a short circuit. In its planned area of ​​cleaning it searches, it jams, it takes a breath and it lives. He doesn't stop the race until he finishes his job. It seems that he is afraid of getting lost, blurs the vision, and recalculates the path. Look for the right path with hesitant steps and a look that doesn't know where to go. "

L'Aquila's skyline has had a frame-freeze quality for years, with dozens of cranes defining its horizon. Day by day, it is an unceasing becoming, intent on being reborn. It is on the massive jibs of these behemoths, meant to lift and to move heavy loads, that I rely on to narrate the trickle of time. Through the time-lapse of slight, almost imperceptible motion, the crawl of time bestows upon the place a resurgence of sorts. The temporary nature of the cranes pertains to a time unaffected by future judgment. From what is an almost frame-freeze, life flows to form a new frame, while the sound of a swing resembling a cradle interrupts over and over, in a neverending motion seemingly intent on opposing the ostensible stillness.

(elevator in Neapolitan dialect)
Moving house is like traveling, living in way stations and restart. I enter, push a button, and start the trammammuro carousel. In the narrow space of the lift compartment, I am going up and down, I am leaving and moving. I reach a level, a landscape, a viewpoint and I am changing again perspective. External noises of vehicles on rails, roads, in the water, in the air are the background to those claustrophobic travels between the buildings, the houses, the domestic walls memories.