Biography
Iginio De Luca is born in Formia (LT) Italy, on August 21, 1966, graduated in Painting in 1989 at the Academy of Fine Arts in Rome, he teaches Decoration and Multimedia Installations at the Academy of Fine Arts in Frosinone.
He is a polyhedric artist; he is a musician, a visual artist, he makes videos, installations, performances. Recently his poetry is focused mainly on the production of videos, photographic images, but also of what he calls "blitz". Considering them between urban art and performance, the artist performs actions sometimes flying over planes, others projecting images or writings on buildings in rapid night raids, still, others disturbing with elements of strong and visual impact, such as fake billboards election.
Hybridizing ethics and aesthetics, technology and behavior actions, De Luca claims interaction with the environment and the public, denouncing, with irony and responsibility, the crisis of the values ​​of our time. The use of multiple and different linguistic registers has always characterized its planning and consequently the methodological and operational choices, suggesting that the common denominator is in the need to remove assurances, to break the codes of expressive formalization, to strive for a trap. to reality, surprising it from behind.
Iginio de Luca's poetry recognizes a unity of concept, which qualifies him as one of the most original artists of the current Italian scene.

Gemelli d‘Italia, 1’25’’, 2009- 2019
The shrill and annoying exchanges of three surreal characters; three disturbing “twins” who with their hysterical dialogues launch sounds, overlapping each other. The metaphor of many Italians who do not communicate because they do not listen, the video displays the grotesque dimension of a nation and a people with many souls.

Uno per tutti, 2’08”, 2018
The official anthem of the European Union consists of a passage from the final movement of the Ninth Symphony of Beethoven, also called the Hymn to Joy – lasting 1’03 “.
I divide the 63 seconds of the hymn by 28 (the countries that make up the Union) and I break the song into fragments just over 2 seconds each. A trivial mathematical computation becomes a generator of metaphors, a numerical pretext that breaks the sound and dismembers the Hymn through 28 audio tracks with their respective 28 pauses. The shreds of notes distort music and Europe, symbolically nullifying the sound continuity that confuses the listener now devoid of logical and consequential references. The 28 mini-hymns is the metaphor of a fragmented Europe that finds it difficult to shrink and shuns a choral context compulsively sliding into a self-referential and selfish dimension, separating more than aggregating, dividing more than adding.

Pole dance, 2’18”, 2017
On the initial titles of the video, there is commercial, aggressive and fashionable music, it is that of Britney Spears who announces bewitching, seductive contexts, also attractive from a sexual point of view. On one of the musical detachments finally appear the images that reveal a completely different scenario: a monument to the fallen of the First World War and on the right the Italian flag waving hanging on a pole. The concepts listed above could paradoxically also fit for this area: Italy that dances.

Solarium, 9’14” 2015
The video insists on a single image, fixed and suspended or imperceptibly transient, in which sublimity and banality, splendor and desolation, beauty and decay, naturalness and staging are coexisting. Frames of a fictitious, captivating and even patinated reality, exposed 24 hours a day in compositions ordered to artificial light that enhances the colors and shapes and conceals the inevitable decomposition in a repeated time suspension. Through a very simple audio mechanism, the video continuously alternates between stasis and dynamism, between passivity and movement, between life and death. Every time an element crosses the camera. The contextual sound comes into action to disappear when the device leaves the scene: a car, a passer-by, a bike, a motor, all pretexts for acoustic activation that reveal the filmed image compared to the photographic one that is perceived when nothing happens and everything is still. The work carries out a point on the ambiguity of perception that transforms the banality of everyday life into the entire metaphor of existence.

Sanrocco, 1’35”, 2014
On August 16 people celebrate San Rocco, patron of Campodimele, my father’s town in the province of Latina. After the mass, the procession and the traveling band, also the saint is greeted in the evening with the ritual fireworks. Shifting the point of view on people means to observe those that are not celebrated and that live in reflected light, the sparkling light of pyrotechnic games. Intermittent flashes stop the surprising figures in sudden flashes, between fear and amazement.

L’Italia è il paese che amo, 2′ 53″, 2010
The risky juxtaposition of different contexts triggers a short circuit between two realities; a carefree and vacationer, the other policy with high social content. The historical discourse, the “descent into the field” of Silvio Berlusconi of the distant 1994 dramatically marks the Italian history of the last decades. An epochal irruption of a new and disturbing electoral subject that changes the old political scenario. In the video his winning and reassuring voice act as a soundtrack to the commercial-Caribbean import summer dances where some movements are repeated in a loop for those who do not want to think and perform only; movements unrelated to Italy, low-cost import movements and zero intellectual fatigue. Everything else in the video is entrusted to the involuntary coincidences that generate all the paradoxical metaphors. 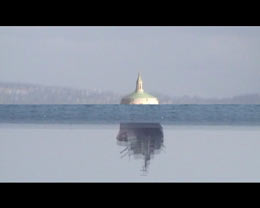 Nato a Formia e
residente a Roma, 3:00, 2010
Two shots, two landscapes, one on the straight and the other upside down touching the heart, the places from which I took these Mongolian belong to my birth (Formia Hospital) and at my current residence (the terrace of my condo study from which we see a part of Rome). The shot is without a tripod, and each follows a random process, contemplative. This creates a different landscape, the result of the continuing slide of a context on the other. Courtesy Martano Gallery, Turin, Italy 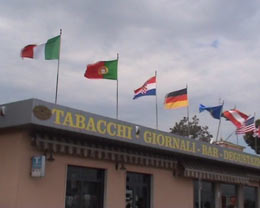 Convention, 1:49, 2010
The debut video is institutional and patriotic, flag-waving and anthem is triumphant. The shot widens and the field gradually began more flags and national anthems. Appears under the sign of a tobacconist. The music becomes chaotic, now no longer be distinguished individual melodies, sound, chaos reigns. So the way the work is totally distorted and what was the early hours is not the end.In collaboration with Galleria Martano, Torino, Italy 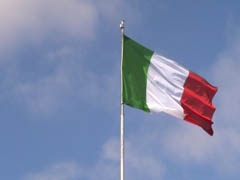 Manica a vento, 3’02”, 2009
The video is a playful and metaphorical about the current situation of our country. the national anthem accompanies the image of a flag that depending on how the wind blows is on the left or right of the screen. This movement also guides the flow of the music, if the flag-waving to the left, jams and rotates in the reverse, bringing back in time. The images and audio at the same time, they are an excuse to reflect on the pseudo-official institutions and his paradox. In collaboration with Galleria Martano, Torino, Italy 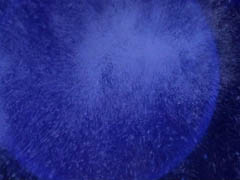 C6 H8 06, 2’01”, 2008
An aspirin tablet dissolves into a glass of water. The shot enlarges the image so that the object is not immediately familiar to the viewer. This video ironically compares two different spatial dimensions (the micro and macro range) and two contexts which are apparently unconnected, the daily and the cosmic one, respectively. In collaboration with Galleria Martano, Torino, Italy 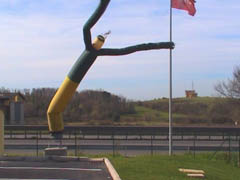 L'urdemo emigrante, 2’45”, 2008
We can see a puppet animated by an air jet. Background as a high-traffic road. The soundtrack is "l' urdemo emigrante" a famous Mario Merola's song. This is a bittersweet reflection on travel and emigration. In collaboration with Martano Gallery, Turin 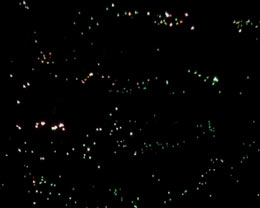 Città Natale, 1:55, 2008
Noises, sirens, traffic ... the night sounds of a city that lives the daily chaos of the end giornata.Le Luwian colored, blinking and shimmering lights are the only sound so much activity. Shortly after the field is expanding, the shot lets us see around .... nothing but a small Christmas tree synthetic fiber-optic, haggard and lonely, timid efervescenze emits light. In collaboration with Galleria Martano, Torino, Italy 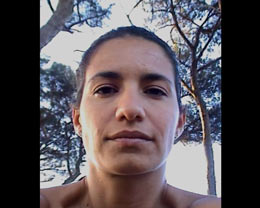 Duecentosettanta°, 3:33, 2007
A face of a woman, calm and relaxed and the setting is natural, earth sky and trees. Gradually the landscape flows behind the face, is the woman who moves or is the background on the back? After passing through the trees, she landed "back on the grass but now the world is upside down and completely warped. In collaboration with Galleria Martano, Torino, Italy 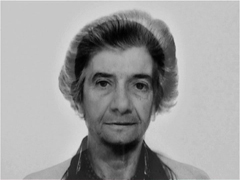 Autofocus, 04' 10", 2006
This is self-portrait video, a game conceived with the purpose of alternating drama, astonishment and irony. I have tried to superimpose my face on both images of my parents, with the intent to play the miracle of bringing static images back to life. In collaboration with Galleria Martano, Torino, Italy 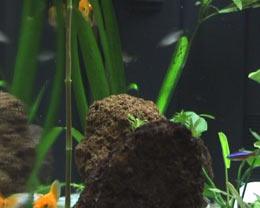 O dentro o fuori, 1:19, 2006
Sometimes an aquarium is disturbed by apparent electrical shock, the fish flapping in hectic, crazy. Provided inside or outside? Fish or bees? Water or air? Concerns about the banal and everyday reality are atrocious, but also the most comical. In collaboration with Galleria Martano, Torino, Italy 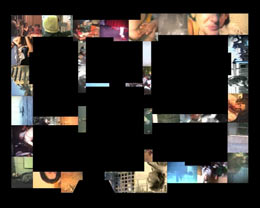 Se queste mura potessero
parlare, 3:29, 2005-2008
The work is a diagram that at 360 ° a series of mini-films in super eight families from the years 60'-70 '. The job title refers to the common metaphor that features the walls of our house turned into sponges visual and sound containers of domestic life and family memories. In collaboration with Galleria Martano, Torino, Italy