Biography
Katharina Gruzei, Klagenfurt, Austria, 1983.
Katharina Gruzei works with photography, film, video, installations, media-performances, sound and objects. Working conceptually, she experiments between these disciplines and arrives at an unique crossover language.
Her field of interest is the use of media as a political as well as a sociological and cultural tool. She works on visual strategies to decode the construction and ideology of Imagery. This research starts from a single image and often ends up in archives. By using found footage she unfolds cultural history as a field of artistic research in which she introduces her own thoughts and statements. Her videos and photographs reveal a distinct interest in the border between still and moving image. Her visual language explores the potential of resistance and empowerment within artistic practice.
Gruzei also researchs in field studies which she later on reconstructs in spatial installations that encompass sound, objects or whatever evolves from her exploration. Her work is exhibited in international contexts. 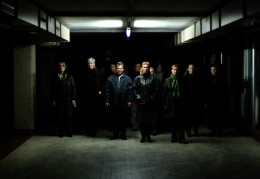 Workers leaving the factory (again) - 11'00", 2012
Inspired by the Lumière brothers’ first film, La sortie de l’usine Lumière à Lyon, which shows a large number of workers leaving their factory’s gate, Gruzei begins in the interior, in a passageway (made to seem incredibly long by the editing) that emerges from the darkness. Solely portions of the corridor — a production line at the closed Austria Tabak factory — flash into view in the buzzing neon light. The impressive sound and choreography of light were taken from an installation by the artist in the empty spaces.
The backs of the first workers, with their coats and bags, gradually enter the picture, and the camera accompanies these individuals as they leave their place of work. More and more of them walk down the dark, flickering hallway. By these scenes the weirdness of the space and the menacing quality of a mass of people who could form a resistance movement becomes increasingly evident. All relevant questions concerning the on-the-job reality experienced by these workers, most of whom are women, can be formulated by means of association: Is it nighttime when they leave the factory? What kind of work do they have to do? What do female laborers earn these days? How long does it take them to get home from this monstrous factory, and when will it be moved to a low-wage country?
When all the protagonists briefly gather as if for a photograph and look straight into the camera, it makes you wonder what a fight for humane labor would have to be like at present to be successful. The automatic gate opens and closes silently to release the anonymous crowd.
(Brigitta Burger-Utzer)
In collaboration / Courtesy: Sixpack Film, Wien, AT/ Charim Galerie, Wien, AT. 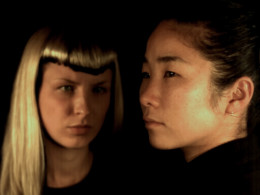 Dialoge I – IV,9’45, 2008/09
Dialoge I - IV shows the communication between two people. The project focuses on creating a sketch of the intense exchange between two cultures by using the gaze as the main form of communication. Here “culture” does not mean a person’s origin but the unique cultivation that everyone experiences and makes people individuals.
Conflicts occur when multilayered cultural,emotional and personal experiences are communicated. The gaze plays a major role within this exchange and it becomes a universal language. The piece renounces verbal communication and introduces gestures instead. In aesthetic terms, the image transcends the borders between photography and film. Initially it appears to be a photograph but upon closer observation the picture starts to move and initiates the dialog. Two people are sitting face to face and communicate with gestures that are used in daily life but could easily evade our perception.
In collaboration / Courtesy: Charim Galerie, Wien, AT.